Thanks to a breakthrough surgical technology, there is a new category of minimally invasive surgery for which you may be a candidate. It is an effective, minimally invasive alternative to both open surgery and laparoscopy. Through the use of the da Vinci Surgical System, surgeons are now able to offer a minimally invasive option for complex surgical procedures. Dr Rifenbery is a recomended surgeon by the da Vinci company. He now serves as a certified proctor, training surgeons all over the United States with this equipment.

You've just been diagnosed with a condition requiring surgery. Until very recently your options included traditional surgery with a large open incision or laparoscopy. A wide variety of procedures can be aided by the use of the robot. Areas that work well for the robot include, but are not limited to: colon, small intestine, stomach (including GERD surgery), gallbladder and biliary tract surgery, esophagus, abdominal wall hernias, spleen, pancreas, and a wide variety of other organs and problems.

Imagine major surgery performed through the smallest of incisions. Imagine having the benefits of a definitive treatment but with the potential for significantly less pain, a shorter hospital stay, faster return to normal daily activities – as well as the potential for better clinical outcomes.

With the da Vinci Surgical System, surgeons and hospitals are re-writing accepted standards for surgical care. da Vinci is changing the experience of surgery.

It is important to know that surgery with da Vinci does not place a robot at the controls; your surgeon is controlling every aspect of the surgery with the assistance of the da Vinci robot.

Only da Vinci overcomes the limitations of both traditional open surgery and conventional minimally invasive surgery. The da Vinci System is a sophisticated robotic platform designed to expand the surgeon’s capabilities and offer a minimally invasive option for major surgery.

With da Vinci, small incisions are used to introduce miniaturized wristed instruments and a high-definition 3D camera. Seated comfortably at the da Vinci console, your surgeon views a magnified, high-resolution 3D image of the surgical site.

At the same time, state-of-the-art robotic and computer technologies scale, filter and seamlessly translate your surgeon's hand movements into precise micro-movements of the da Vinci instruments.

The System cannot be programmed and it cannot make decisions on its own. The da Vinci System requires that every surgical maneuver be performed with direct input from your surgeon.

One of the most exciting advances with robot surgery is the transition to single incision surgery. New and evolving technology and equipment, have allowed increasingly complicated surgical procedures. We are now able to perform these same complicated cases with only a single incision in the umbilicus. All of the safety we have learned with 4 incision laparoscopic surgery is now possible with a single bellybutton incision. Neither robotic surgery nor single-incision surgery is new. In fact, we have been using both techniques for some time. However, combining the advantages of the robot, with the faster recover and minimal scaring of single site is very new. At the Center for Minimally Invasive Surgery, we have embraced this new advancement, and have been among the first to offer it to our patients. At this point, only gallbladder surgery is offered by single incision. However, as the technology advances, the sky is the limit. Dr Rifenbery was the first surgeon in the South Puget Sound Region with the necessary training and experience to be able to offer this innovative technique. Our team has performed more of these procedures then any other center in the region. 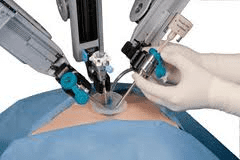 Unlike traditional robotic surgeries requiring three to five small incisions, this new technology allows for a single incision in the belly button where instruments are placed and the diseased gallbladder is removed. The surgery can be performed in under one hour, with most patients going home the same day.

During the procedure, the surgeon sits comfortably at a console, viewing a three-dimensional, high-definition image of the patient’s anatomy. The surgeon uses hand-held controls to move the instrument’s arms and camera. In real-time, the system translates the surgeon’s hand, wrist and finger movements into precise movements of the miniaturized instruments inside the patient.

More than one million people in the U.S. have their gallbladders removed each year. Most are performed with traditional laparoscopy using several incisions. However, most people who require gallbladder removal are now candidates for robotic, single-incision surgery.

Office Hours
Get in touch